Work at the new Cancer Care Center at CMMC continues at a brisk pace and is on schedule for its planned opening next spring. The construction is less visible to the public now that the walls are up, but the accompanying pictures show how much progress is taking place.

Concrete has been poured on the second floor and 90% of the framing is completed there as well. Much of the work now centers on the mechanical, electrical and plumbing systems.

“This is one of the more crucial phases of the project,” said Construction Project Manager Dave Provencher. “All of the work requires great attention to detail, but this is especially true when adding these components to the structure.”

We are also getting a better look at where the linear accelerators will be housed as well as the building’s first named space: the Jeffrey L. Brickman Community Room.

The Cancer Care Center at Central Maine Medical Center took another major step to becoming a reality on May 7 as the final beam was put into place during a “topping off” ceremony. The event was held on the grounds of what will be the new facility that is expected to open in early 2022. A topping off ceremony is a construction industry tradition to mark the completion of the structure of a building.

Over the past week, Central Maine Healthcare team members, patients and visitors signed the final beam that was hoisted by crane to the top of the building.

During Friday’s ceremony, CMH providers added purple stickers that had been signed by cancer patients.

Among the speakers was patient Christina Zilius, who thanked her CMH doctors and staff. “On behalf of myself and my family, thank you. For not only saving my life and the lives of many others. But for also giving me the chance to see my daughter in her prom dress, to dance with my son at his wedding and to hold my future grandchildren in my arms,” Zilius said.

CMH President and CEO Jeff Brickman said, “It will be a critical resource for our entire region. It will expand access to world class patient-centered care delivered by the talented professionals we’ve recruited – expert, compassionate care supported by the latest technology. It will be the next level of healthcare for our region.”

We speak with David Provencher, the Project Manager for Central Maine Healthcare’s Cancer Care Center, for a quick walk-thru of the construction site.

The construction of the CMH Cancer Care Center continues to progress and we are now starting to see the foundation take shape. We are so excited to see the project unfold and are looking forward to completing this final step in integrating all of our oncology services so our patients can receive high quality, expert care in one location.

Check out this time lapse video to see the progress that has been made since the project started.

The Sun Journal stopped by today to check out the progress our construction crew has been making and snapped a photo to share with their readers. 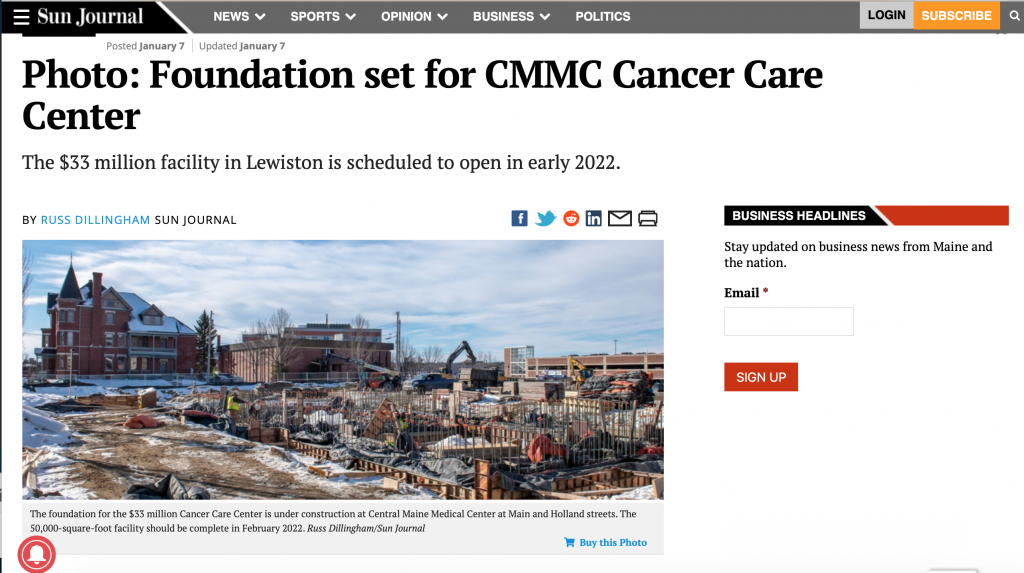 Check out the progress made on the CMH Cancer Care Center construction project from October 27 – November 14.