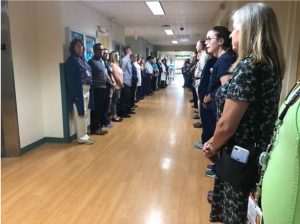 LEWISTON, Maine – In honor of the sacrifices made by veterans and their families, Central Maine Healthcare has instituted a special Final Salute program at its three hospitals, paying respect to veterans that die under the hospitals’ care.

The program, developed to ensure that the CMH system provides the highest respect to those who have served in the U.S. armed forces, includes two ceremonies: the Veteran’s Final Salute, which occurs prior to the patient’s passing, and the Honor Walk, which gathers hospital personnel outside the patient’s room as they are moved.

“When a veteran dies within our hospital, we all feel the loss. Military life and ceremonies are steeped in tradition and symbolism, and it should continue for those who served when they reach the end of their life’s tour of duty, ” said Peter Wright, president of Bridgton and Rumford Hospitals.

During the Final Salute, with the approval of a veteran’s family, a veteran employed by Central Maine Healthcare presents the veteran with a folded flag and certificate, and delivers a message thanking them for their service. After the message, the hospital employee presents a military salute.

The Honor Walk occurs after the veteran’s passing. An internal electronic message alerts hospital staff to the time and location of the walk, and staff members gather in the hallway to pay final respects to their patient.

The program was implemented at Central Maine Medical Center, Bridgton and Rumford Hospitals during the summer. So far, two Final Salutes (at CMMC and Rumford Hospital) and one Honor Walk (at Rumford) have occurred.  The program will also be implemented at two long-term care facilities in the CMH system: Rumford Community Home and Bolster Heights Residential Care in Auburn.

In October, the Rumford Veterans of Foreign Wars presented Rumford Hospital staff with 10 flags to use in the program.