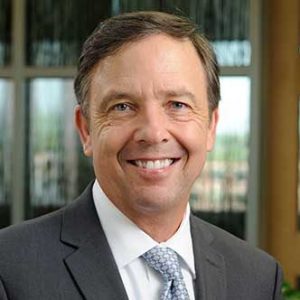 Steven G. Littleson, DBA, FACHE, is Central Maine Healthcare’s president and CEO, President of Central Maine Medical Center and President Interim of Bridgton Hospital and Rumford Hospital.  In these roles, he advances the integration of CMH as a high-quality delivery system and has executive responsibility for CMMC.

Dr. Littleson joined CMH in 2020 after serving as chief integration and operating officer for Lancaster General Health in Pennsylvania. Prior to that position, he was regional president of Jefferson Health in Philadelphia and served as president, hospitals division and chief operation officer for Hackensack Meridian Health in New Jersey. Additionally, he has held senior roles at Meridian Health, Southern Ocean County Hospital, both in New Jersey, and Sentara Healthcare in Virginia.

A fellow of the American College of Healthcare Executives, Dr. Littleson served as an officer and chairman of the boards of the New Jersey Hospital Association and the New Jersey Council of Teaching Hospitals. He was on the boards of numerous community service organizations including Boy Scouts of America, United Way, Rotary International, the American Red Cross and Big Brothers Big Sisters.

He currently serves as an adjunct faculty member of New York University’s Robert F. Wagner Graduate School of Public Service and he has been a regular guest lecturer for the Peking University Executive MBA program in Beijing, China.